My Review of The Alchemical Visions Tarot: 78 Keys to Unlock Your Subconscious Mind

“I understood the tremendous power that can be inherent in the Tarot—the power of imagery can open and expand minds.” 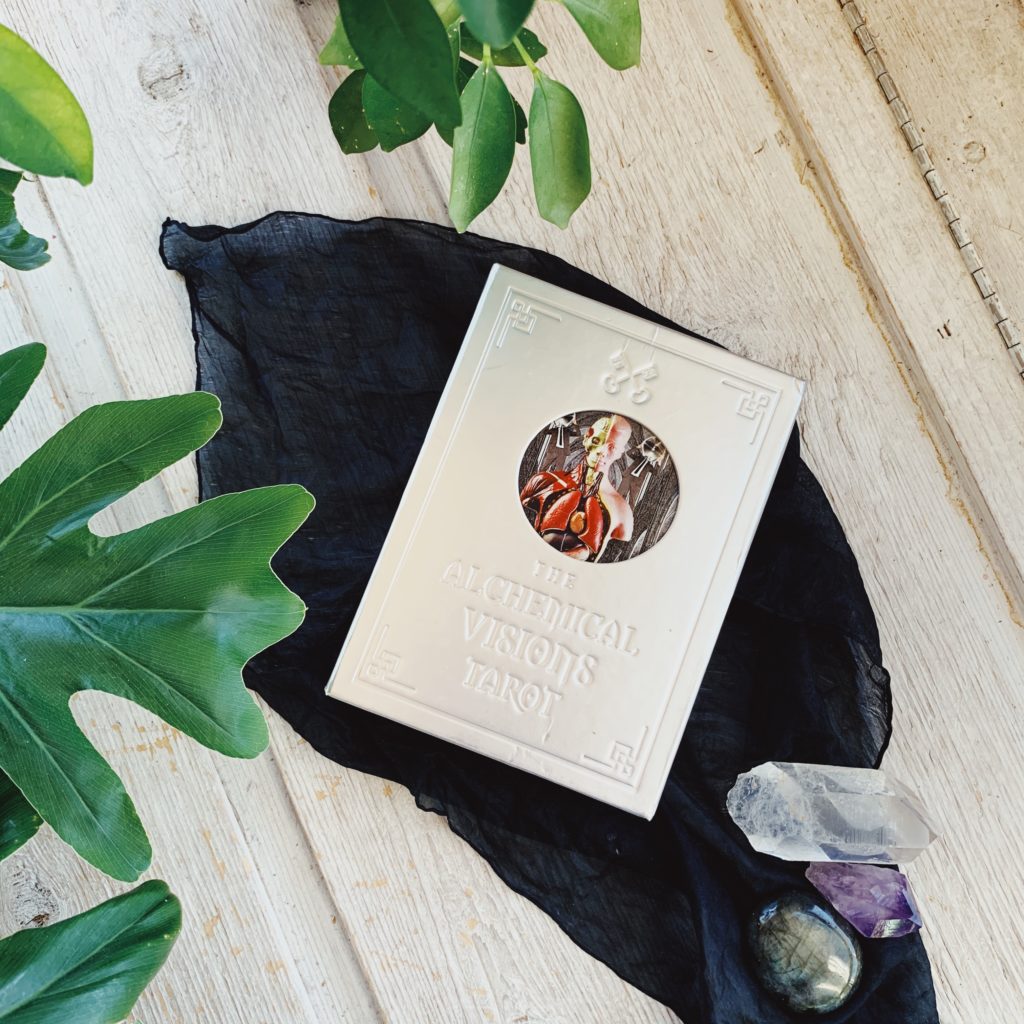 As an artist and oracle I have great respect for anyone called to birth their personal vision of the Tarot. Answering that call is a daunting task, a pilgrimage of the soul and an exercise in trust and surrender.

Deck creator, Arthur Taussig began his initiation into the world of Tarot by, “studying them at length, living with each card from hours to days.” The result of his journey is the intricate and hypnotic Alchemical Visions Tarot: 78 Keys to Unlock Your Subconscious Mind.

The Alchemical Visions Tarot captures the rich history and magic the ancient Tarot has gathered through time, space and tradition. All the elements of “Traditional” Tarot are found here, but nothing about this deck is a superficial rehashing of familiar images. Taussig breathes new life into the archetypes to convey universal truth and personal narrative simultaneously.

I could sense the presence and power each card, brought to life by visionary writing and artwork. With layer upon layer of occult wisdom, alchemical science and transpersonal psychology woven into the artwork. A deep reverence for the sacred and mysterious is felt in every detail.

I would liken my experience with this deck to a transcendental journey… as if each card were a passageway leading me deeper and deeper. For me this is the essence of a sensitive oracle… images and symbols that invite the seeker into a process of unfolding self-awareness.

“I became a Traveler within the Tarot. My odyssey took me through as many lands as trod the original Ulysses.” 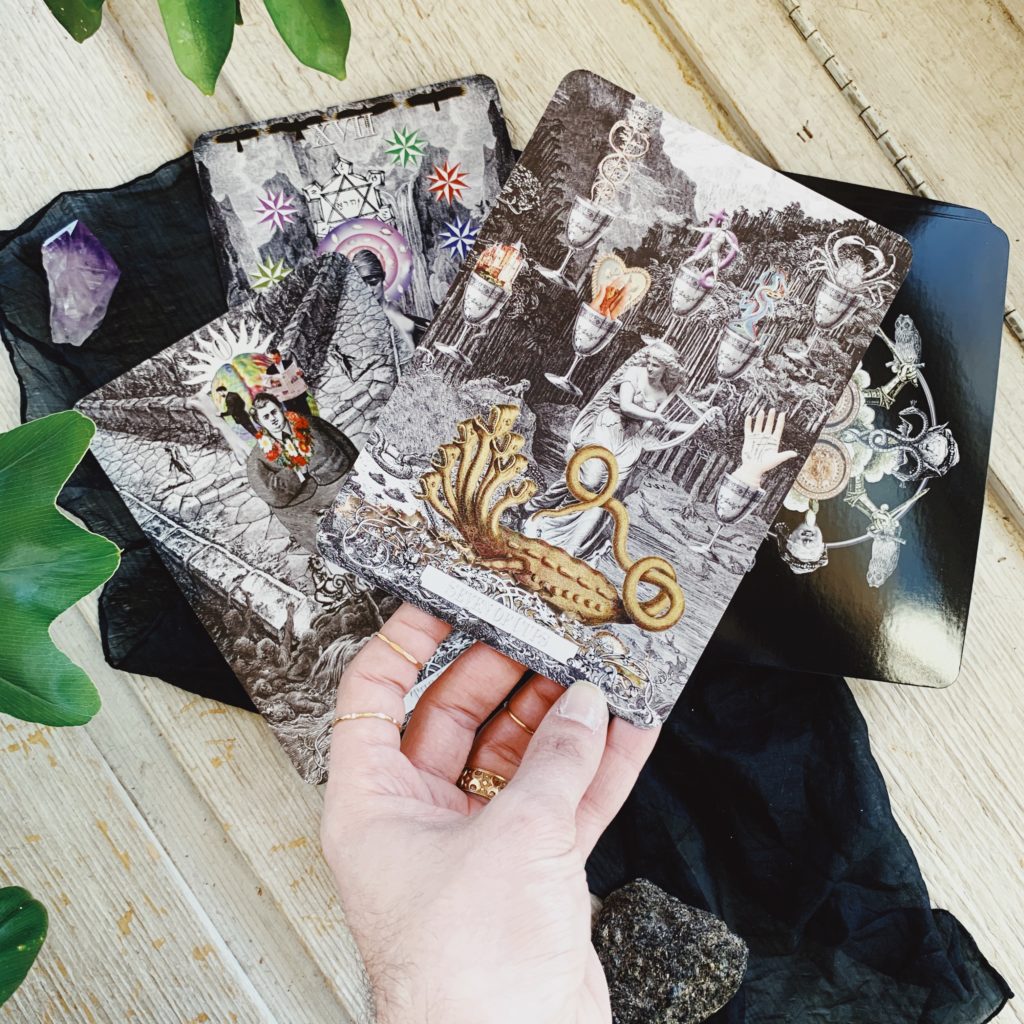 The Alchemical Visions Tarot is a stunning presentation with a beautiful silver keepsake box, vividly colored cards and a very thorough guidebook taking the seeker through the layers of meaning conveyed each card.

Tarot novice be warned this deck is filled with deeply esoteric artwork, alchemical symbolism and thought provoking writing. I would not consider this a beginners deck based on the complexity. And, as a tool geared more toward spiritual growth and understanding this deck will be more appealing to the occultist, rather than the causal tarot reader.

Because of the sheer size of this deck, the cards work really well as a focal point for meditation and trance work. You might choose one card to use as a backdrop for ceremonial work or constructing an altar space. Or, if you wanted to follow Taussig’s lead, you can choose one card everyday to “live” with!

I began choosing one card a day from The Alchemical Visions Tarotas a journal prompt. Writing down my first impressions then tucking it into my journal to check back in at the end of the day. Working with the deck in such a way that it became ceremonial… even leaving the card on my nightstand with a crystal and candle as a spontaneous altar.

One thing that I found perplexing was the lack of instruction on using the deck, at least from the creator’s point of view. I really wanted to know how he personally felt one should work with these images. With that in mind I created a special spread for The Alchemical Visions Tarotcalled the Vision Seeker Spread (I will share that below).

For anyone concerned about the durability of the cards… though the weight of the cardstock might seem thin this is intentional for large cards. Larger decks are more cumbersome to shuffle and thicker cardstock tends to bend or get damaged easier. However, a thinner cardstock has more give and the core is usually reinforced with carbon to keep the cards from bending. Weight/thickness of cardstock does not equal durability!

The Alchemical Visions Tarot is an extraordinary deck, geared toward the scholarly seeker, called to delve into the esoteric, transformative and therapeutic possibilities of the Tarot. This deck isn’t about getting answers to questions; it’s about revealing truths.

With these cards you will unlock the interior world where personal gnosis can be discovered.

Vision Seeker spread I created for The Alchemical Visions Tarot 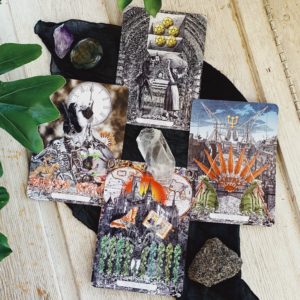 As multifaceted beings we exist on many levels, from our rich interior lives, to the physical realm we call reality. For this spread I use the alchemical adage: As above, so below. As within, so without.

With this spread you can orient yourself within macrocosmic universe to discover the interconnection that exist between you, your higher self and the universe at large.

To use this spread simply shuffle the deck however you like. As you do this set an intention to receive a “vision” from your higher self and the Universal Spirit.

When you are ready draw four cards:

From Weiser Books, an imprint of Red Wheel/Weiser, The Alchemical Visions Tarot by Arthur Taussig is available wherever books and ebooks are sold or directly from the publisher at www.redwheelweiser.com